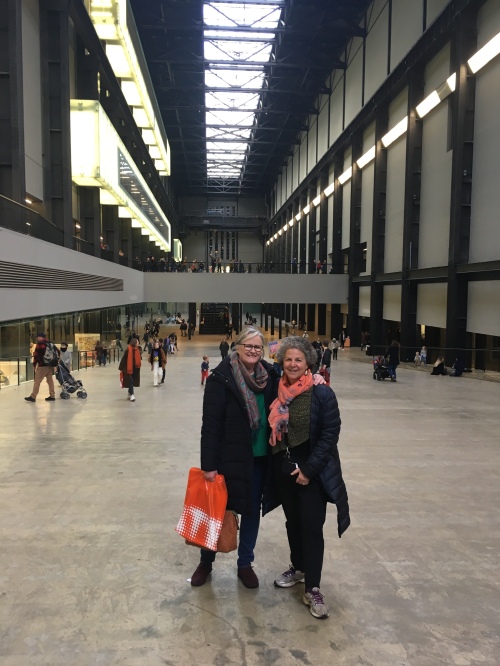 I met another friend of 39 years, Jemima, who came all the way from her home in the northern town of Ludlow to meet up, for the first time in about four years. What a treat! She suggested an exhibit of work by Pierre Bonnard at the Tate Modern, one of my favorite London “it” spots. The exhibit itself turned out to be stunning (Go! Go!)

South Bank was packed with people, many speaking languages other than English, strolling along the Thames on a sunny day with a brisk wind. Such a buzzy place. London seems so vibrant, healthier than ever and yet Brexit looms, creating an odd sense of doom.

We had a good lunch at Zizzi, a chain Italian restaurant with surprisingly good food that, even more surprisingly, arrived at our table very quickly and still tasted good. (We shared pizza and a salad.) We also had a really nice view of the Thames and all the hubbub along the South Bank.

on Saturday night, Francine, Russ and I had highly unusual vegan and veggie Brazilian food at Oliveira in East Sheen. We are now back on Shalstone road where Russ is engrossed in a chess channel on YouTube that he swears by (Power Play Chess, should you be so inclined.)

On my last day in London, Francine, Russ and I had a nice brunch (English breakfast for Francine and I) at Cote restaurant in the pretty Richmond village of Barnes and then were blown by an intense wind along the Thames path, back to Mortlake.