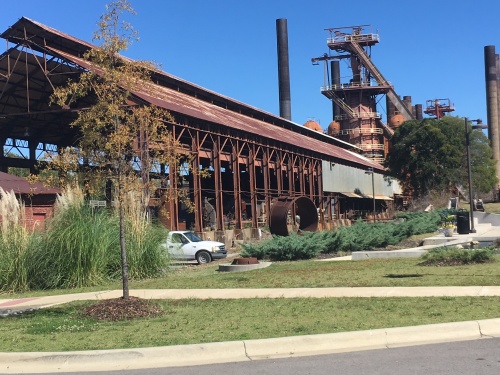 Friends asked me why on earth I’d want to visit Alabama — deep in the heart of Trump country — but that’s part of the reason we went last fall. I’d never been and wanted to see what a deep-Trump country place is like. We were only there briefly and primarily in one of the ‘bama’s bluest bits (Birmingham). But we took off-highway roads back to Mississippi (yes, we visited that red state too) , passing through Tuscaloosa and other rural, more red parts of the state. On one two-lane road, we counted at least a half dozen tiny evangelical churches in a row, akin to having all the houses on my block here in Iowa be churches. That told us a thing or two.

Last night, though, Alabama came through, offering  a much-longed for sign that this country has not completely lost its mind and moral bearings. Or so I’d like to think. And I’m glad to know that I can feel even better about visiting Alabama next time! 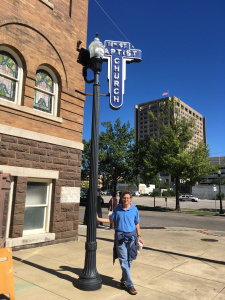 Site of the horrific church bombing by racists, two of whom were successfully put away by Alabama’s new U.S. Senator, Doug Jones. 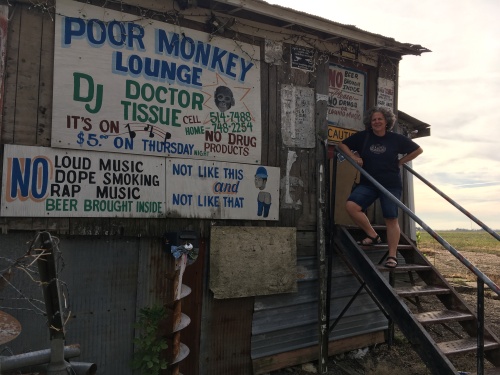 Great drive here from Birmingham. We took the longer more backroads route from Birmingham through Tuscaloosa back into Mississippi. It was technically maybe 2 hours longer than using the interstate but seemed much shorter because there was so much to see: one small church after another (picture a neighborhood street but lined with churches not homes); vast fields of cotton; big new McMansions, the occasional old beauty and many tumbledown shacks and trailers (although not as many as I remember from my last trip here 10 years ago).

Greenwood is a well-heeled town with an elegant looking spa hotel on the main strret, a great book store (Turn Row which I liked better than the more famous one in Oxford), an excellent local crafts/gift shop next door with excellent local pottery. We had a stylish lunch at the surprisingly sleek and contemporary Delta Bistro, which has white walls with colorful contemporary art. We ate surprisingly light  fried green tomatoes dotted with chunks of crabmeat and excellent jalapeno catfish cakes with “comeback” sauce akin to a spicy Russian dressing. The  famous Italian restaurant in town, Lusco’s, is open for dinner only. It gets rave reviews! 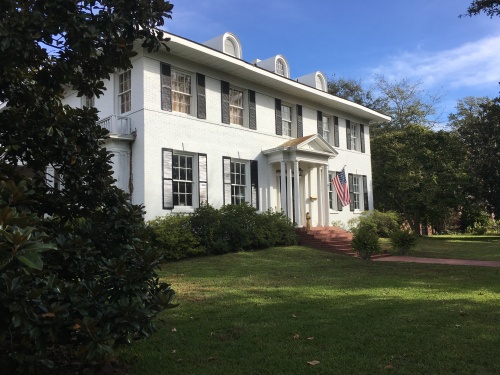 Heading north to the tiny town of Money, we drove over the Tallahatchie bridge (made famous by the Bobbie Gentry song) and drove past the gracious-living old home where “The Help” was filmed. (The lady at the gift shop tipped us off.). Then we stopped at an old church where blues legend Robert Johnson may be buried (“may” being the key word) and the crumbling weed-strewn wall of the remains of the drug store, Bryant’s, where the Emmett Till tragedy began. (There are very helpful historical signs in these lonesome spots). 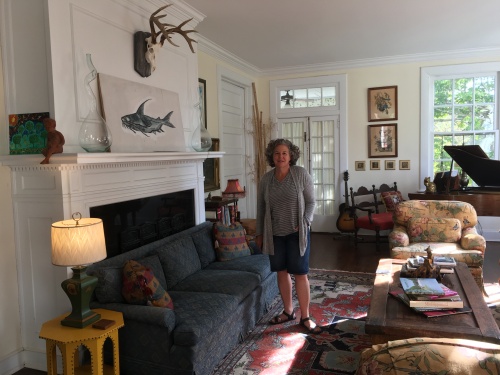 Onto the bigger city of Cleveland where we dropped in at the famous meat market/restaurant which was setting up for what looked like a good dinner, with the tables at the opposite side of the room from the meat counter. My favorite t-shirt was in a shop next door (“Jesus loves this hot mess”) plus some “fighting okra” gear (apparently the real mascot of Delta State). (Later read that Trump has opened its first small town hotel in Cleveland. Ick.)

Next a quick stop in the worn but interesting town of Merigold where we sound the famous pottery shop (after passing by it twice) on a residential street. We were excited to find the famous juke joint Poor Monkey on the other side of Highway 61, a wooden shack with hand painted signs on the edge of a field along a tree -lined dirt road. The sign said it was open for music on Thursday only (this was a Thursday) but we soon found  out that the owner died almost exactly a year ago and the place is closed indefinitely. 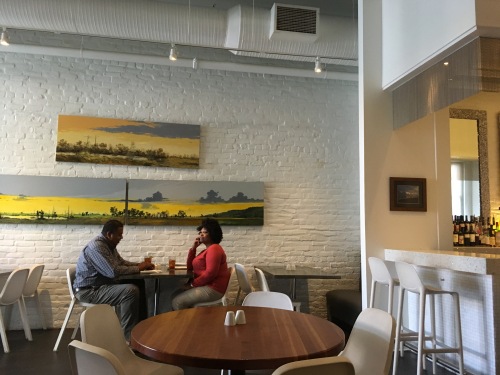 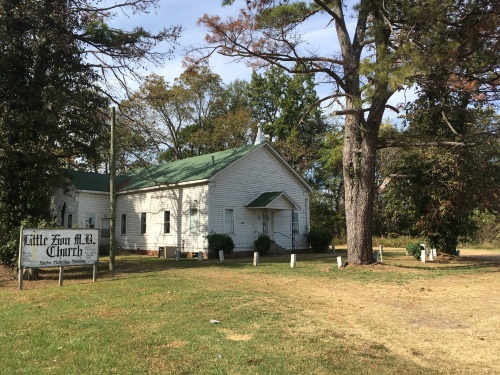 Robert Johnson believed to be buried in Money, MS

We stayed at a remarkable airbnb in Clarksdale, an elegant old White House run by a bohemian and charming Southern belle who grew up on a “farm” nearby. (We’re guessing it was a plantation from the presumably inherited furniture and photos inside the White House.)  We stayed in  a beautiful old room with a well-appointed bed, old faded lamps, and three of four walls were windows.  The other two rooms weren’t occupied and the owners live elsewhere so we had this huge house to ourselves. The ground floor had an eccentric mix of old to-the-manor-born furnishings and contemporary art and photos of the belle during her modeling and design days in NY City.

Our loquacious host, sent us to a great place for dinner that we never would have found otherwise — Kathryn’s on the Lake, about a half hour outside of town on Moon Lake. Very unassuming on the outside, just a plain lakeside building, inside it had knotty pine walls, taxidermy, local art and red and white checked oilskin tablecloths. Clearly a favor of locals, four good old boys sat in one corner, another big family in another. The food was outstanding– steak filet, onion rings, a squash casserole, Kentucky Alexander (yes, I will be dieting when I get home) and excellent service. 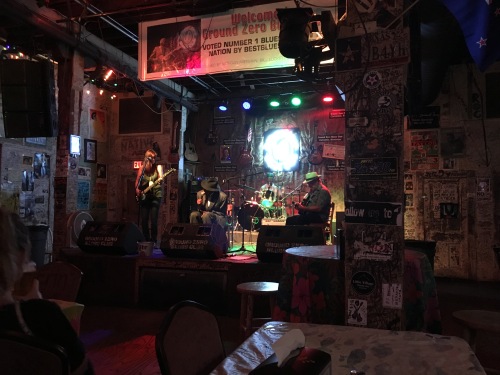 At night, we went to Ground  Zero for blues. Not the best. It was open mike night and the talent was spotty but interesting to see who gave it a go. The pros on stage were good. A weathered old black guy named “razor blade”, willowy white girl playing guitar, a white middle aged guy from England also on guitar (and particularly good!) and a young black guy on drums. We were struck again by how many Europeans were there as well as some very drunk Aussies. We were hoping to go to Red’s (a more “authentic” juke joint) but it didn’t offer music on Thursday. We did find out that unlike in the past, blues can be found almost every night in Clarksdale now. The city seems to have made a concerted effort to do this, which is good news and useful for the future. Red’s, for example, has music on Wednesdays, as well as the weekend.

Alabama at last. Wanted to come here for ages, not sure why but my friend Kathy Jones Is from Mobile which may have contributed to my curiosity. We are staying in yet another great Airbnb in the Avondale neighborhood, in a lovely old wood house with a big front porch on a street with well-renovated old once-modest homes. Yet another “historically hip” neighborhood east of downtown, akin to Cooper-young in ’emphasis, East Nashville, Silver Hill in Albuquerque and wherever we were in Salt Lake. I seem to be drawn to these places… call it the Royal Oak factor (my parents had an art gallery in this suburban Detroit city, an outpost of coolness before the whole place turned hip. 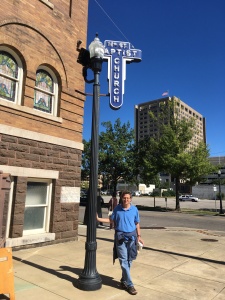 But I’m afraid that the NYTimes 36 Hours Birmingham sort of oversold the city, as Dirck politely put it. Nothing has bowled us over beyond the 16th Street Baptist church where the infamous bombing that killed 4 girls during the early 1960’s still stands regally. We walked around a very quiet downtown (on a Wednesday morning) and read civil rights signs that are part of the walking tour here, which was interesting but we skipped the big civil rights museum because we spent hours at the Memphis one. 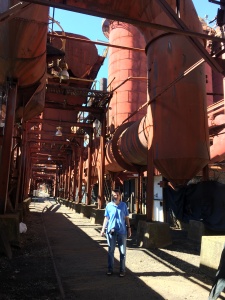 We did have a good soul food/smoked meat sampler at Saw’s  Soul Kitchen in our neighborhood and the Sloss furnace, a former industrial site for producing pig iron, now a museum) taught us about Birmingham’s reputation as  “The Pittsburgh of the south.) The Red Mountain hiking area through the woods of an old mining area wasn’t terribly interesting or scenic and the trails were poorly marked so never made it to our destination (Grace’s Gap).

About half of this 19th century Avondale airbnb house is off bounds and being renovated but we have all the rest of it to ourselves, and there is plenty of space. Two bedrooms, a bathroom, a lovely sitting room with an old fireplace, comfy couch, interesting paintings, wine and fresh bread awaiting us. So nice. We got here at about 5 and quickly set out on foot to explore, landing at Naked Arts, a good crafts gallery.

The owner, who still has a Belgium accent although she’s lived here for decades, suggested a good street to walk on and a good restaurant (39th street to 41st street, where we ate at Avondale Brewery— delicious grilled sandwich with pork belly, fried egg and cheddar cheese; a salad with greens, bacon, watermelon, feta) and there was a talented guy singing and guitar-playing good covers. We also had excellent soul food the next day at Saw’s.

During our morning in Oxford, we enjoyed our fantastic Airbnb in the countryside , which had the most comfortable bed! And then we enjoyed the huge second floor screened in porch where we ate homemade coffee cake, left for us by our host, and watched the sun stream in through the pine trees. We walked past the chicken and rooster house on the property to a big workshop where the co-owner, a metal worker, was making big sculptures. Nice guy and he suggested a great drive nearby where we did, as promised,  see fields of cotton near the tiny town of Tula ready for harvest and post-harvest cotton compressed into large “modules” about the size of a mobile home.  We continued on a pretty back road (highway 334) to Tupelo, where we enjoyed Elvis’s birthplace and church, which was surprisingly interesting. Screens dropped down on three walls of the tiny church for a film reenactment of a Pentecostal service, complete with a young impressionable Elvis. Facts I never knew: Elvis had a twin. Stillborn, sadly. Also, Elvis’s dad Vernon spent time in jail. A bad check. We ended up eating burgers at nearby Johnny’s Diner, sitting as fate would have it, in Elvis’s booth, eating delicious burgers that arrived wrapped in waxed paper. Old school. 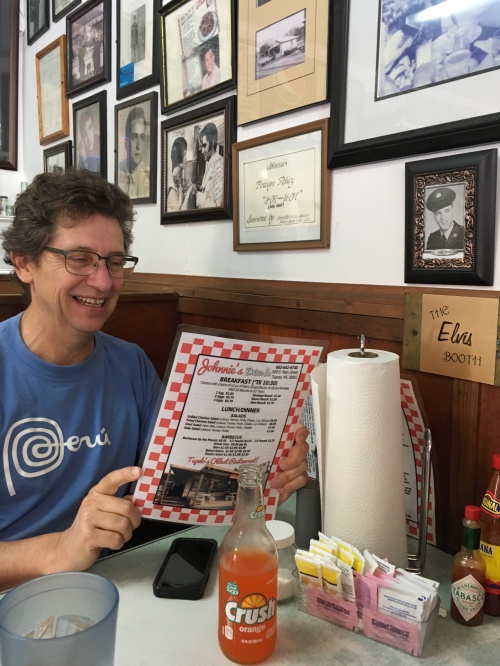 Another nutritious meal. I haven’t had orange crush since maybe 1974. Too sweet.

Almost forgot that we visited the home of another very famous Mississippian – William Faulkner. Rowan Oak couldn’t be more different than Elvis’s humble home. It’s a lovely white columned gentlemen’s estate with a giant trees lining the path to the front door.