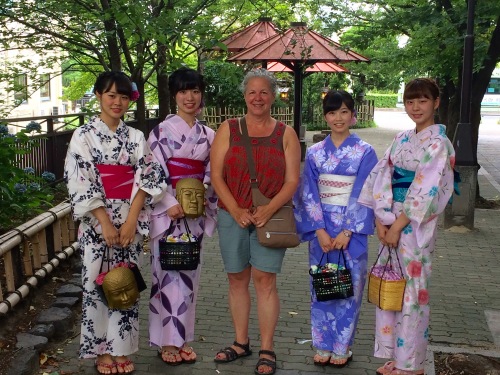 We found the ancient architecture I was expecting this morning in Gion, beautiful old wood houses and stone streets, shrines and women (and men) in kimonos, purple hydrangea and Americans zipping by on bike tours. The 100-year-old sushi place that was too crowded for us yesterday, Izuju,  welcomed us today. We sat in a small old fashioned narrow dining area and ate Kyoto-style sushi, nothing like sushi I’ve had before. For one thing, the fish was grilled and there types of fish and combinations new to us. Aya (sweet fish) is the local seasonal fish, white, delicious grilled and dipped in a light sauce. Then saba sushi – chub mackerel with salt and rice vinegar (which I liked, tasted like smoked whitefish)’ maki sushi (Japanese mushroom, white flowered gourd, Japanese horn root  and omelet; sama maki (sliced Red Sea bass, bread, the Japanese herb kinone, and vinegar rice). 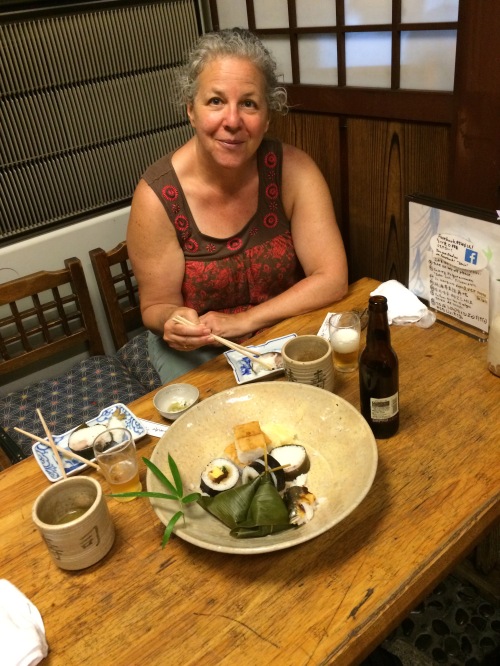 We followed hoarded of tourists on a walking tour of east Gion and Higashi, along narrow streets lined with ancient wood buildings, with elegant shops,  and lush green gardens and enormous ancient buildings (Yasaka Shrine, Kodaiji Temple, Ryzokan Shrine and Kiyomiza-dera Temple.) Spectacular. I ended up buying a lot of gifts, glasswork with inlaid pieces of old kimonos, cotton scarves,  oil blotting face papers (perfect to mop up sweat for another dripping humid day) and a short vintage kimono at a store called Hinaya Kyoto (4-452 Gojo-bashi Higashi) near Kodaiji Temple. I almost bought a gorgeous two-piece long jacket made from old kimonos for $93 until I realized it was $930. (Or about 93000 yen which I read as 9300.) 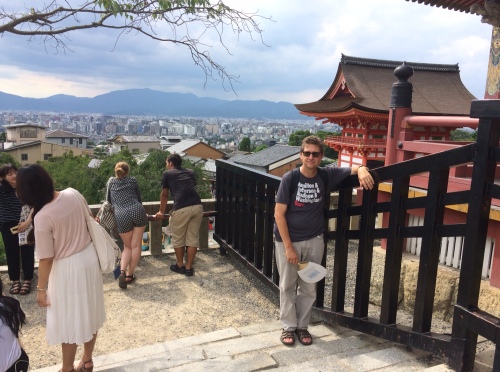 Tonight we went for a many course set Kaiseki meal at Giro Giro Hitoshina which was as hipster  as the Anthony Bourdain-published “Rice Noodle Fish” book promised.  Lots of interesting ingredients and combinations. The server did seem impressed when I said we’d had aye (fish) for lunch, and he knew the restaurant Izuju, also recommended by an Anthony Bourdain-affiliated website, Roads and Kingdoms, which has not failed us! At Giro Giro, we met some lovely older elegant Japanese couples, both of whom had lived in the states. The men were chemists who did post doc work, one at U Va, the other at Minnesota. We got to the restaurant early and were told to go away and come back which is how we found another cool place around the corner, Len, a hipster hostel, bar and restaurant serving fish and chips and cheese boards. Ahh to be young again but middle age ain’t so bad. At least today. 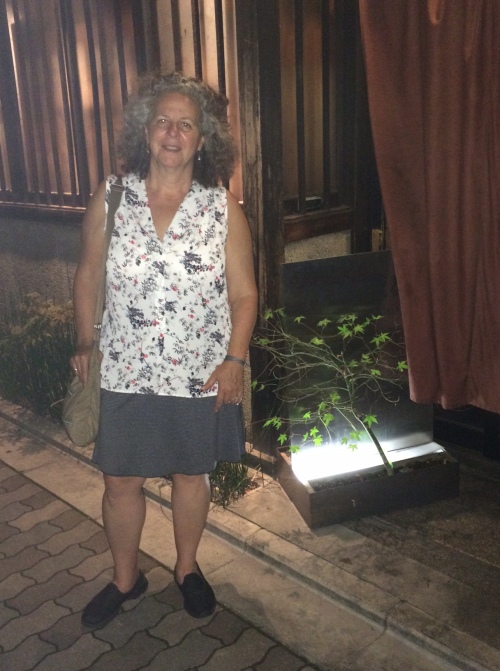