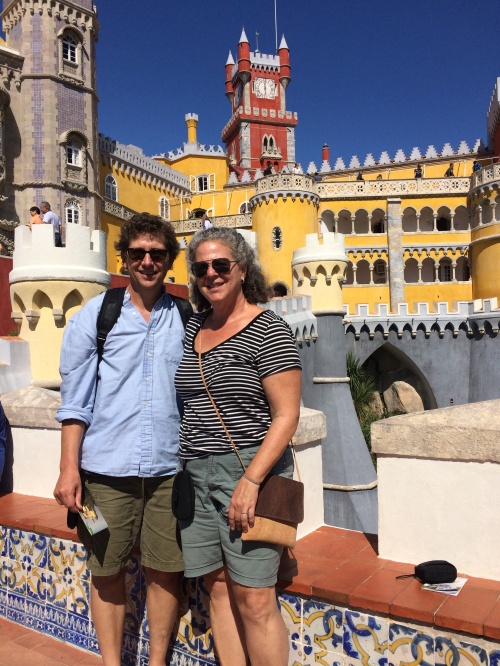 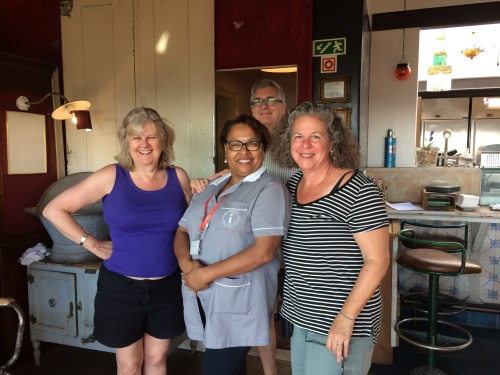 With Lourdes, server extraordinaire at the Independente

Hard core tourist stuff today which was ultimately worth it but not always fun. I was excited to go to Sintra, about a 30-minute train ride northwest to the mountains by the coast to see some of the incredible architecture there but knew it would be mobbed with tourists, as it was.

Still the Pena Palace with its fairy-tale turrets and ramparts high on a mountain above the clouds, with a view below that stretched for miles, was ravishing. Loved the colors of the palace too — mustard yellow, deep rouge, blue and white tiles. We had a sandwich for not inflated prices at the little place near the entrance which was much less crowded then the cafeteria at the exit to the castle. Then we took the shuttle bus (5 euros and worth the price) down the hill to the old city to tour the National Palace, which was also astonishing with ornate tiled rooms, gold leaf and painted wood and stone details and two very cool giant white chimneys resembling milk bottles, which added to the other- worldliness. But we frequently got stopped and stuck between very large tour groups, which got oppressive. Next time: start earlier. I wanted to tour some of the other impressive houses but two was enough for one day. 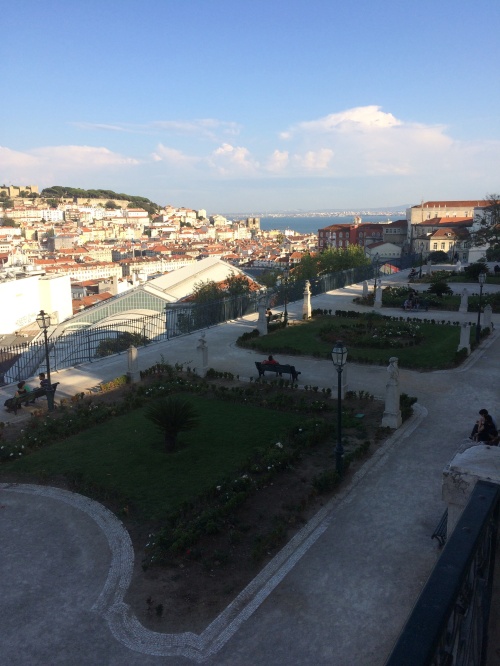 Lisbon view from park across the street from our hotel

Back in Lisbon we hit happy hour in the kiosk of the lovely overlook and park across from our hotel and drank beer and lemonade at a wood table with a glorious view of the city, with the castle high on the hill and the blue riverfront and all the city in between and around.

Our hotel, the Independente, has been great, perfect location, good price (about $117 per night), funky but comfortable and clean, with a terrific breakfast served by a very cheerful woman named Lourdes who is originally from Cape Verde.