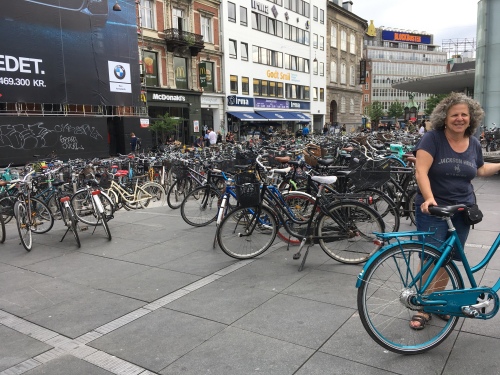 I haven’t seen this many bikes in motion since RAGBRAI, the annual ride across Iowa that lures about 20,000 riders. The difference here is the riders are sharing a lane along busy city streets, which takes some getting used to, especially since Danes don’t do the courteous Iowans’ heads up (“on your left”) when they pass you. Often the pass very closely on the left or the right, which can be unnerving. We found out that the street we ride from the Norreport station to Nørrebro is the most heavily cycled street in the world. I believe it. Other than the sometimes intimidating volume of bikes, this is a bikers’ city. Everyone is riding everywhere and there are designated lanes and traffic lights for bikers that help set them apart from the walkers and the cars.

The terrain is also flat, although the brick streets along the canals are very rough riding. And the distances from one attraction to the next are easily ride-able. We rode to many of the main tourist spots and neighborhoods –the graffiti and psychedelic murals of the hippie neighborhood Christiana; the cool spiral steepled church in Christianshvan.

We rode twice over the cool new bridge that connects christianshavn and Nyhavn, the famous canal lined with painted row houses in deep ochre, rouge and blues. We passed a lot of grand buildings we were not familiar with. We rode thru Vesterbro, another neighborhood I considered staying in, Vesterbro, and ate outdoors in the meat packing District at Pate Pate. (Inspired by that name, I had excellent chicken livers. Also lemonade with little bits of freshly ground vanilla bean.)

Tonight we went to Tivoli, which was fun but we don’t do rides and we didn’t get the full effect of the fairytale lights at night because it was still light out when we left at 10:15 p.m., which is amazing. It didn’t get dark until 10:45.