The weather wasn’t cooperative enough for us to take a proper hike so we walked instead in Leah’s Nob Hill neighborhood past pretty adobe houses with colorful vegetation and cacti to the main Nob Hill shopping district, where we explored some craft, resale and jewelry shops – and discovered a familiar car with Michigan plates and Iowa bumper stickers that did indeed belong to our friend Scott who moved here recently. We tracked him down and had a drink later. Small world.

Even when it’s rainy, the sky is very dramatic, with a band of dark blue and below it light blue and fluffy grey white clouds. The dark bit looks like a heavy curtain rising up or down on the mountains. We walked around the pretty grounds of Los Poblanos, a farm converted into a classy inn, restaurant and pricey gift shop. The bar there was closed so we ended up having chips and salsa in old town at Charles Street Cafe, an old New Mexican place. 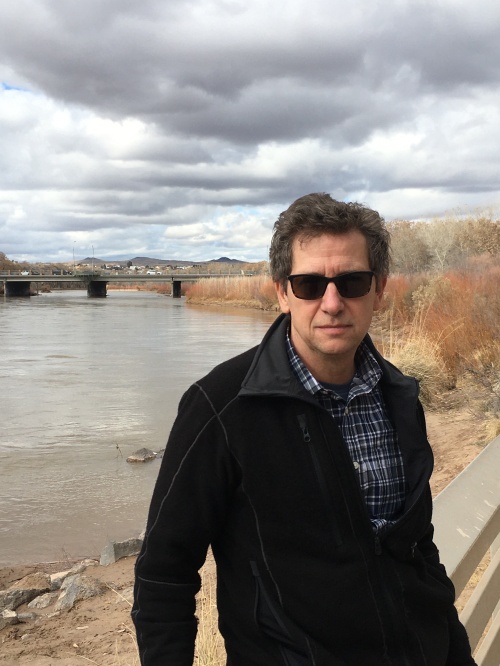 On our last day, we walked along the muddy banks of the Rio Grande along the Bosque trail and checked out the El Vado motel, a renovated white adobe gem along Route 66.
Way cool mid-century modern furnishings, pool, outdoor food court and reasonable prices. Turns out it’s owned by the same folks as our go-to lodging in Santa Fe — the El Ray Inn. Our last meal in abq was at Duran Central Pharmacy, a fun place that’s a little dining area with a counter and good New Mexican fare (particularly hot carne adovada, I learned) tucked in an adobe drug store that is also an interesting gift shop. We really enjoyed Albuquerque and are thinking it may be a possible retirement option…