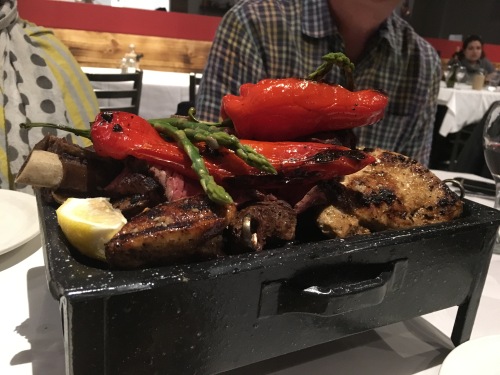 We tried out the latest South American restaurant in town, Al Punto — serving meat-centric Argentinian fare in a strip mall in the Des Moines suburb of Windsor Heights. I’m hesitant to knock any earnest newcomer but the menu was too limited and  meat-heavy, albeit quality meat-heavy for me.  There seemed to be too much emphasis on volume, although I gather that’s the Argentinian way (and the Brazilian way).  My husband and I would have preferred to share the restaurant’s signature entree — the $30 per person mixed meat/vegetable grill aka “Gaucho Experience”  — but were discouraged from doing so (for starters, we were told it would cost $10 to share) so we both went Gaucho, along with our friend D.  and ended up taking much of it home.

The meat arrived on a portable wood-fired “Parrillada” grill — a heap of beef, lamb, chicken, chorizo, red peppers, onions and asparagus that looked less alluring to eat than daunting to tackle. The meat was  well-seasoned and well-cooked.  There was just too much of it.  It was served with delicious garlic potatoes and excellent homemade chimichurri sauce (which greatly enhanced the meat and veg). It also came good beef empanadas (although we would have preferred something other than beef but the two other options listed on the menu weren’t available) – plus a choice of starters including Cesar salad (so-so) and deviled eggs stuffed with salmon salad ( too rich and pale pink for me). One of our party did get shrimp as an entree — huge “Wild Argentinian red shrimp” – – which also arrived in a big mound.

Meanwhile, I’ve returned twice to the new Peruvian restaurant in town, Panka and continue to be impressed. Maybe I just prefer Peruvian cuisine to Argentinian — especially wide and diverse selection, including light options such as ceviche.  I tried a second soup — a perfectly seasoned Chupe de Camarones, hearty chowder with pieces of shrimp and chunks of creamy yellow potatoes – and a delicious Causa de Cangrejo (an attractive round mound layered with yellow mashed potatoes, slices of avocado and crabmeat.) There are still many things I want to try on the menu, although I already have some favorites I’d love to eat again… 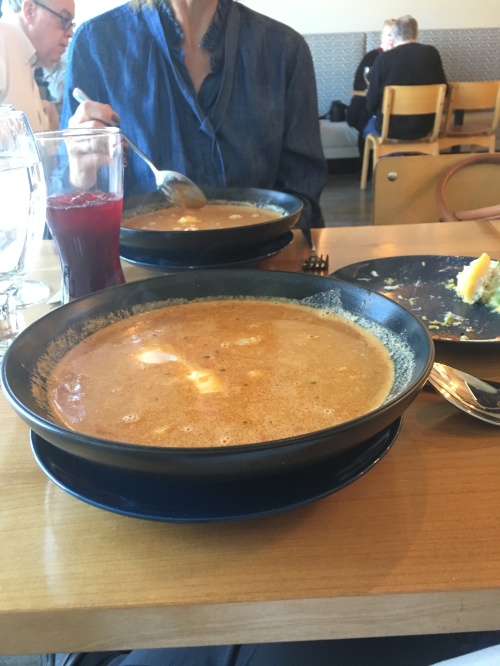 Shrimp Chowder at Panka (and almost-devoured Causa to the right). The purple drink is a Peruvian classic — Chicha Morada, made with purple corn, fruit and spices.