My story in Minneapolis Star Trib on Chicago’s Andersonville neighborhood

Here’s my story on Chicago’s Andersonville neighborhood with major assist from my kids. Click on the link to see who got the much-deserved credit for the photos in the story (which are not the photos below. ) 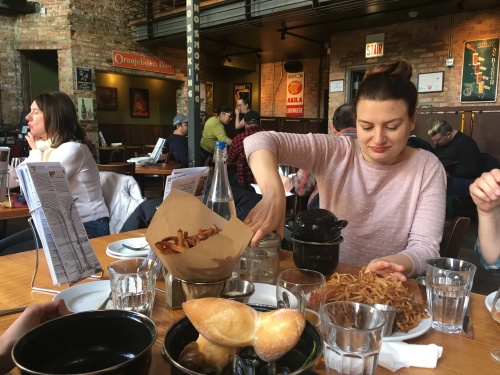 The Andersonville neighborhood offers a buffet of delights, Swedish and otherwise.

By Betsy Rubiner Special to the Star Tribune

Glögg goes down easy on a cold winter night in Chicago, as I learned recently when my son-in-law insisted I visit the venerable Simon’s Tavern to get a full-bodied taste of the city’s North Side neighborhood of Andersonville (andersonville.org).

With a sweetness that masks its punch, the traditional Swedish mulled wine is a Simon’s mainstay (served warm in the winter and cold in the summer, as a “glögg slushie”) and a robust reminder of Andersonville’s past, when mid-19th-century Swedish immigrants settled in what was then the boondocks north of Chicago.

Other signs of Swedish-ness endure — the most obvious being a water tower replica painted blue and yellow to resemble a massive Swedish flag, perched above a former hardware store housing a Swedish American Museum. Nearby is Svea, a Swedish cafe opened in 1924, serving meatballs, pancakes and a chicken sandwich named after Pippi Longstocking; and, of course, Simon’s, opened in 1934, with its landmark neon sign of a blue and yellow fish holding a cocktail, a nod to another Swedish delicacy, pickled herring.

But as the neighborhood’s Middle Eastern bakery, feminist bookstore, high-end art supply shop and other independently owned galleries and vintage/antique stores make clear, Andersonville offers a smorgasbord of stuff, Swedish and not. During frequent visits, I usually discover yet another enticing shop or restaurant, often with help from enthusiastic transplants — my young adult kids who have found relatively affordable housing in Andersonville and the surrounding Edgewater area.

My favorite shops, mostly concentrated in the eight blocks south of Rascher Avenue, tend to have a distinct sensibility, environment and mood. At the self-described feminist bookstore Women & Children First, which caters to Andersonville’s sizable LBGTQ community as well as women and children, it’s always interesting to see which books are prominently displayed, with helpful staff reviews, and I often discover unknown gems (womenandchildrenfirst.com).

At the midcentury furniture store Scout, the vibe is hip retro urban (1-773-275-5700), while the eccentric offerings at the shop/gallery Transistorinclude lamps made from old rotary telephones, slide projectors and desk fans (transistor­chicago.com).

A colorful history and atmospherics are a big part of the charm at Simon’s, opened by a Swedish immigrant who ran a speakeasy in the basement and a bulletproof mini-bank in what now looks like an abandoned broom closet in the bar.

Warm and welcoming, the neighborhood tavern’s dim, tunnellike space includes the original 60-foot-long mahogany bar with a ship etched into the glass, across from a long 1956 mural titled “The Deer Hunter’s Ball,” its canvas buckled with age. Nursing our glögg, served in a glass mug with a thin Swedish ginger snap, or pepparkakor, we could clearly see the mural’s deer in the wild and murkier scenes of people partying (1-773-878-0894).

A block south, Hopleaf Bar offers an extensive beer selection (craft, draft, bottles) and upscale Belgian-inspired pub grub, from mussels steamed in a Belgian beer broth to a Wisconsin smoked ham sandwich on dark pumpernickel bread with Gruyère and coleslaw. The pomme frites are delicious. Even better are the thin and crisp onion rings, served in a large mound.

We like eating at a wood table in the comfortable back dining room, which has old tin beer advertisements hanging on exposed brick walls, a wood-burning stove and windows overlooking a backyard patio. One heads up: no kids — or anyone under 21 — allowed. This is a bar, even though the backroom feels like a restaurant (hopleafbar.com).

At Lost Larson, a stylish Swedish bakery that opened last year, the traditional pastry cardamom buns, or kardemummabullar, taste pretty darned close to those we ate last year in Stockholm during many a fika, the Swedish coffee-and-cake break. But, psst, the cinnamon roll and monkey bread are pretty great, too (lostlar­son.com).

Before leaving Andersonville, I often stop at the Middle East Bakery & Grocery to order a shawafel wrap (a chicken shawarma/falafel mashup) to go at the counter and load up on hummus, tabbouleh, baba ganoush and cushiony barbari flatbread for the drive home (middleeastbakeryandgrocery.com). 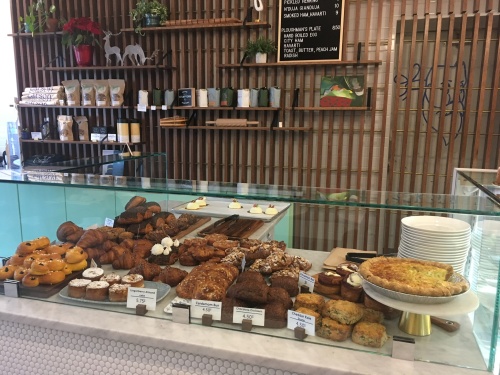