My friend Nell and I only had a half day here but made the most of it. After driving my son Noah back to his apartment in Minneapolis from a trip home to DSM, we checked into our pretty Airbnb, an early 1900’s four square with a lovely garden in South Minneapolis near the Minnehaha Parkway and bike trail. We stopped at  Midtown Global Market for some “Hot Indian” food including an “indurrito (Indian burrito) and delicious “Indi-Frites” – crispy seasoned fries with an aoili dipping sauce. Clever.

The trails were relatively quiet on a Monday but we didn’t want to “break the rules” so we ended up riding a few sections of the trail on the side of the access road lining the trail, which fortunately had few cars but was at times bumpy and sandy. No big deal. I also learned that the Lake of the Isles offers immediate and easy access to the Midtown Greenway trail, another favorite and we rode that subterranean-feeling trail to a cool trailside bike store/cafe called MPLS Coaster Brake Cafe, near the Global Market. I loved that you could wheel your bike right into the store/cafe and park it near some lounge chairs to take a break. No need to lock out front. 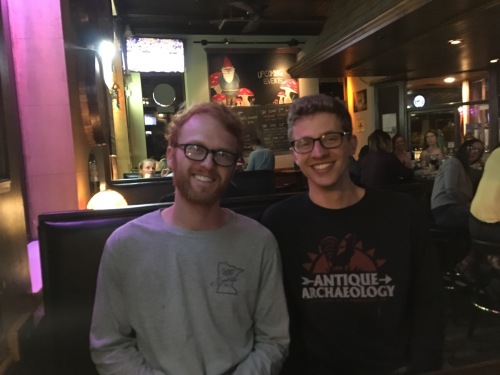 We rode back on Portland Avenue along the bike lane which worked well, given the heavy rush hour traffic. There were several other riders, which helped make us a more visible presence on a busy city thoroughfare. Back on the Minnehaha Parkway, we learned the hard way to stay on the trail rather than the bordering streets, in order to get under 35W Highway. (We had to backtrack slightly and portage down some steps with our bikes.) We also had to overshoot the street where our airbnb was because there wasn’t an easy exit off the wooded trail — but no big deal, we just backtracked a little. 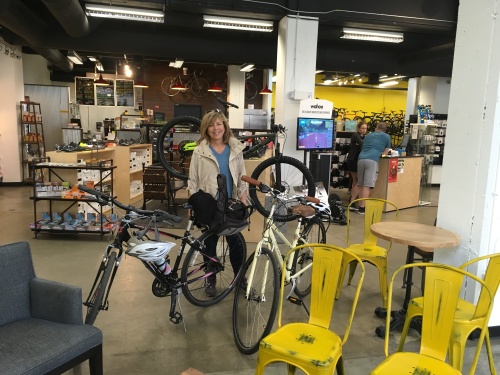 Dinner was at The Happy Gnome, a gastropub in St. Paul (which I kept calling the “Grumpy Troll,” a Wisconsin place we’re going to this weekend). We went for the beer (note to self: Indeed is a good local brew!) and ended up staying to eat (note to self: good salmon burger) rather than going to a nearby Cambodian restaurant, as planned. Great company, with two of the world’s nicest boys, errr, young men! On the way home, we stopped briefly at Patisserie 46 (because it was only blocks from our airbnb) and for a quick walk around Minnehaha Falls (note to self: hike this area properly some time!).