It was about 80 degrees and sunny midday in Malibu where we had a perfect lunch at Malibu Seafood, a unassuming little shack on the side of busy Highway 101 overlooking The beach and Ocean. We had crispy fish and chips, grilled mahi mahi and soaked up the scene. fortune lay we arrived at 11:30 and got in and out quickly, placing our order then eating at an outdoor picnic table, feeling very lucky to suddenly have some Californians in the family to lure me back to Los Angeles after, um, at least 25 years. We drove about 10 miles north to a hidden gem of a beach my cousin Scott, who lives here, recommended that’s such a hidden gem I am reluctant to reveal its name. Okay, it’s Las Pescatores.

There was only one other car in the small dirt parking lot and when we walked through some brush we found below us a brilliant ocean cove with soft white sand, a few jagged boulders in a glistening Ocean and no one but us and way in the distance, a fisherman on some rocks. Odd that this year has found me unexpectedly on coastlines I haven’t visited in decades, Cape Cod last month and now Southern California. the beach today was more rugged, almost masculine compared to the Provincetown beaches, white rather than tan sand, jagged mountains rather than soft grassy dunes, wind whipped trees and lush vegetation rather than grasses and low bushes.

we drove back to the valley through Topanga Canyon which had the same hippie vibe I remembered from the 1980s. We stopped at a classic Topanga haunt, cafe mimosa. Perfect outing. 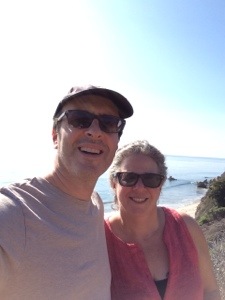