Full day in Pisac, first visiting the ruins and the the huge Sunday market. A lot of fun and activity, since we took a spectacular walk down the mountain from the ruins to the market over some rocky terrain, crossing right over some of the ancient stone terraces rising above the town. We had an excellent empanada pulled right out of a huge clay oven at Horno Tipico de Santa Lucia and the best brownie in the sacred valley at the Blue Llama. At the market we bought alpaca sweaters and mittens, a cute knit kids hat, a peru tshirt, an inca cola tshirt, a scarey knit face mask, pornographic inca playing cards, a cd of Peruvian flute music. We bartered a bit but we aren’t very good at it.

tonight we had dinner at mayupata, a somewhat upscale restaurant where Noah had alpaca grilled with miso sauce and I had a good loom saltada, a beef stir fry that seems a good bet when all else fails. Dirck wasn’t eating much. He has had an upset stomach and today a headache which leads me to think he had altitude sickness. Last night we ate at the heart cafe which is a do good place (it helps kids and abused women, I believe.) the food was mediocre, despite the good reviews we had heard. one thing I’ve learned is that the Peruvian version of the American and Italian staples we usually eat rarely resemble what we are used to. the pasta with tomato sauce ends up being sweeter than we are used to, the pizza has odd crust and cheese, the chocolate chip cookie is crumbly like an oatmeal cookie, the burrito tortilla has the texture of Ethiopian bread.

I have also learned that there are broken MasterCard machines all over southern Peru, nd sometimes broken Visa machines. allegedly. Basically the restaurants and shops don’t want to pay the credit card fee. Which is starting to irritate me because they have big signs on their doors touting their credit card use. 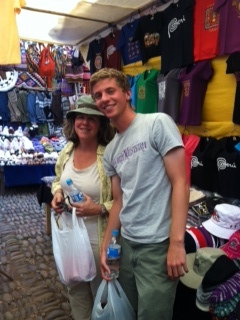 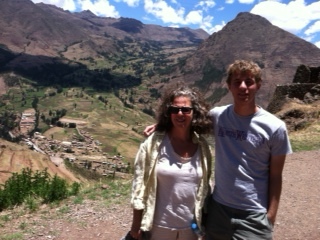