Is there anywhere like New York city on a sunny fall day? The place was humming with activity, crowds of people outside everywhere enjoying the sights and sounds of a vibrant city.

After a quick direct morning flight from DSM (thank you delta) we had an afternoon to play in the city. What a treat! We took the 6 train south from the upper east side where we are staying at my aunt S’s apartment to 14th Street, stopped at The Strand bookstore (where I did find a copy of a 20-year old book about Vietnam that I hoped to find, except it was hardback), and then walked west along 12th street (relatively quiet and charming compared to 14th), past 5th Avenue (and One Fifth Avenue, where my parents had their wedding) thru Greenwich village to Gansevoort market, where we had delicious ceviche bowls at a Peruvian stand, Mission Ceviche, sitting on seats around the cooks. Across the street, we bought cardamom buns at Fabrique, the first nyc outpost of the bakery we discovered last summer in Stockholm.

The High Line seemed narrower and even more jam packed than usual, which added to the excitement and frustration. Many people speaking foreign languages. Stunning plantings, art installations, architecture, city and river views from on high. Very slow walkers (and I am not exactly fast.)

The eight Amy Sherold portraits of ordinary striking black people (not Michelle Obama this time) jumped off the stark white walls of the large airy open gallery on 22nd street. Stunning. As with the Obama portraits in DC at the National Portrait gallery, I saw black people in particular posing next to these portraits, which I found moving.

We continue north on the High Line to the glittering new colossus of Hudson Yards, which felt like a cross between a Batman set and Disneyland, with huge hulking dramatic buildings and skyscrapers and a copper-colored tower of tunneled walkways that tourists and presumably locals were lining up to walk up and up and down and down. 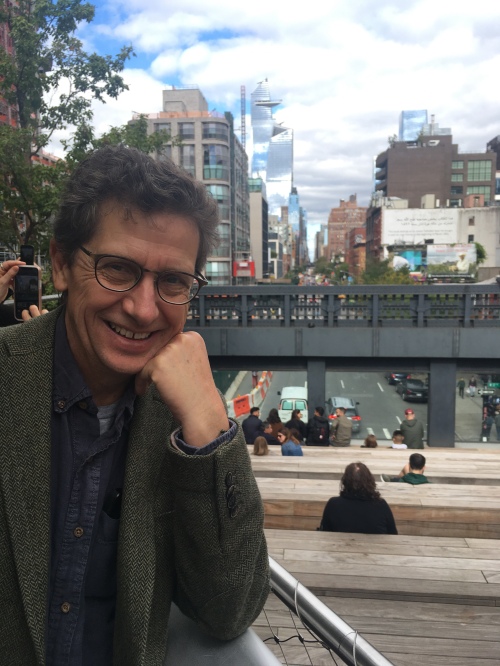 Overwhelming and disorienting and showy and unnecessary are the words that came to mind. (Here’s a promo blurb: Hudson Yards is unlike anything ever built before — a living, breathing neighborhood that champions first-to-New York experiences. Climb Vessel, the interactive centerpiece of Hudson Yards. Visit The Shed, a new center for art and inspiration. Or take in the scene from thrilling new heights on Edge — an outdoor space a thousand feet in the air.)

For a far more charming encounter with architecture, we sat in the ornate cavernous Moorish Central Synagogue and enjoyed the gorgeous singing and ceremony of a Shabbat service (we are here for a family bat mitzvah). Also was relieved, sadly, that we had to go through a metal detector to get into the sanctuary.

Another cherished post-Thanksgiving adventure with  Myra during which two old friends from college catch up while wandering around a great American city, noshing, window-shopping, people-watching, architecture-admiring, restaurant-searching, laughing, lamenting, reminiscing, dreaming and occasionally searching for a decent public bathroom (Penn Station had to do this time). Among the highlights (beyond the great company):

– The High Line, which never disappoints, especially on a beautiful afternoon. There are always new art installations when I return, even after just a few months. And more work has been completed since my last visit in September on the retro-looking building with wide oval windows designed by the late Zaha Hadid. This time we found the attractive, European-feeling  new 34 St-Hudson Yards

Station, with its cool mosaic tile domed ceiling underground. (Opened in 2015, the station is the first new one in NY in 26 years.)

– The crafts at the holiday fair at Bryant Park were generally less impressive than those at the holiday fair at Grand Central Station, but what a lovely scene with the pretty ice skating rink, holiday lights and wreath-festooned stone lions at the foot of the New York Public Library.  Also appreciated the inventiveness of the food vendors including one cooking unlikely creations with matzoh. Yes matzoh.

– Sakagura, a remarkably authentic Japanese restaurant (including classic interactive, water-spraying Japanese toilets) in the basement of a drab building just east of Grand Central. Who knew? Apparently a lot of people, including many people of Japanese descent. The place was packed. I almost felt like I was back in Kyoto, without the around-the-world flight. Instead, we walked down two flights of steps akin to the kind found in an aging middle school basement.

Earlier in the day, my cousin took us on a fascinating tour of the production “commissary” of Juice Press, in a cool Long Island City marketplace.

Juice Press tour with the family!

Ebola and the High Line and me

It turns out that I was walking in NYC along the High Line and took the 1 subway line north to 108 street almost exactly 24 hours before the young doctor who is now in a hospital with Ebola. He’s also from my home state of Michigan, in another Detroit suburb near mine…grosse pointe as it turns out. It is strange how close this horrible epidemic is getting to us all and hard to know what to think. I did get a flu shot today. I hope the young doctor is okay. He sounds like an amazing person.

What a spectacular day in New York City with perfect weather – warm but not hot, sunshine but breezy. I could have walked forever (if my feet would permit.) One upside of all the rain NYC has gotten this summer (and I know there are major downsides) is that everything is so green and lush – which is very refreshing coming from the parched and browning Midwest. Central Park looked like Ireland this morning as I walked across it at around 72nd street. Took a stroll up Madison Avenue to early 80s to check out the latest completely unaffordable fall fashions, then had lunch w/a dear friend at Bella Blue (great artichoke salad!). We took the subway to 14th and 8th avenue then a short walk to the High Line. It was not only longer than my last visit (thanks to the recent opening of the second section) but the vegetation was higher and dense – sometimes blocking views of the river but still one of the great things to do in this city – great views you’d never see otherwise and fun people watching. Not so sure about the Pineapple-Jalapeno ice bar I ate – good at the time but Jalapeno is not sitting that well with me.