Playing some serious catch-up, blogging on the long slog plane trip home and trying to remember what we did in Vietnam two days ago before it all becomes a dream. We took two buses (which was an adventure – cost about 80 cents each) to Cholon, which is what’s left of Saigon’s Chinatown in District 5. First stop was the market, of course, which was overwhelming — so much commerce. People were refreshingly uninterested in selling to us, a nice change from the big tourist mark Ben Thánh, which we quickly dipped in and out of on our first day.

We wandered around the crowded streets and stumbled into another great meal, this one Chinese food ( we think, sliced char sui pork, bumbling tofu with sautéed ground pork that arrived in a very hot clay bowl, fresh off the fire at the entrance to the restaurant ) at  jam-packed Com Ga Dong Nguyen, which according to the waiters clothing and the menu has been around since 1943. 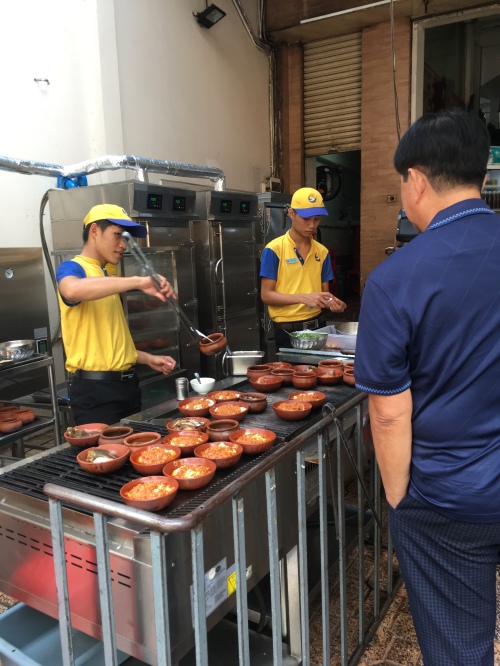 Next stop two of several pagodas in the area (Phuoc An Hoi Quan; Thien Hau) and then the hunt for a functioning ATM. Vietnam is a cash society (unlike Scandinavia where we were last year), especially for purchases on the street. Upscale restaurants aren’t an issue. But we had trouble using Dirck’s ATM card in particular, which has a chip. That may be the issue. But sometimes the machine wasn’t in the right network or was out of cash.

I returned to my neighborhood spa for a facial and foot massage, technically, although I three women worked on my legs and arms and shoulders, as well, in a small dark room. Again, cheap…cost $14…and the women were so sweet. They insisted on taking photos with me including one where I had shocking red lips — thanks to an app called snow, I believe.

We made one final trip to District 1 and finally found another Hanoi Mark recommendation, The Secret Cottage, which we reached by walking through a long narrow basket/scarf shop and up two flights of scuffed up concrete steps. Suddenly we were in chic land, in a dining room with old plaster walls, cool wood furniture and contemporary art. The food was cool too – sort of groovy updates of traditional food like Bánh mi and Bun Thit. We finally got caught in a downpour but had our coats (which we’ve toted everywhere and rarely used. We got to talking with a guy from Utah as we waited out the rain under a shop awning. He is a supply chain developer who has been traveling more often to Vietnam rather than China, given the trade tariffs, working to switch manufacturing to VN.