What a difference sunshine – and warmer temps – make! The city and river looked particularly lovely in the sun. And I was much more comfortable walking around. I even took off my light down coat instead of shivering inside it.

We followed yet another tip from an Uber driver (we used several Ubers and several drivers were eager to weigh in on where we should eat in particular) and went to the Cafe du Monde outpost in the outlet mall next to our hotel (The Hilton). Nowhere near the charming atmosphere of the original cafe in the French Quarter BUT the beignets and coffee au lait were idential and the inside-mall location improved when we discovered we could leave and eat outside at a table on the Riverwalk, overlooking the Mississippi.  I wanted to take the short ferry ride to Algiers Point, nearby, ($2 each way) but opted instead to use my Streetcar Pass from the day before which I discovered was valid for 24 hours — so good until 11:15 a.m. Wow!

I didn’t realize how many streetcars New Orleans has, beyond the most famous — The St. Charles Avenue line. I could have taken the Riverfront line to the French Quarter. But since I was trying to get further east to the Bywater neighborhood, I took the Canal Street Car north and then the Rampart Street car east which got me to the Faubourg Marigny neigborhood, one neighborhood west of Bywater and probably the place I’d like to stay next (or even live).  There seemed to be fewer Rampart Street cars but otherwise, all good. (I also could have taken a boring old bus.)

I walked for blocks and blocks around Bywater and Marigny, charmed (and sometimes amused) by the houses, many all tarted up.  I stopped for an orange juice and resisted eating the pastries (including small portions of King Cake) at the welcoming Cake Cafe in Marigny. I also enjoyed the new-ish Crescent Park in Bywater. My visit began by walking through what looked like a dreary industrial area and walking up and down the steep steps of a  huge rusted arch, above a railroad track.  I was rewarded by a completely different landscape — a riverfront with landscaped gardens and lovely views of downtown, shimmering in the river, off in the distance.

Dirck and I had a great lunch at Napoleon House yet another very atmospheric place (a 1798 building), full of character with crumbling walls, old portraits, worn wood tables, old-fashioned waiters and a lovely garden. The food was very good too – we shared half a muffuletta and sides of red beans and rice and jambalaya. Also had an excellent Pimm’s Cup. (My second one of trip. No ginger this time.) 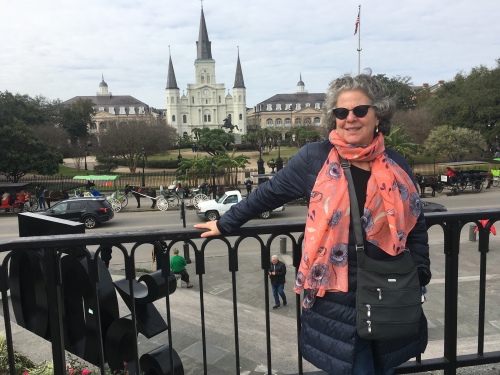