Thanks to the Krause Corporation (owner of the Kum & Go convenience store chain) for opening its fantastic new headquarters downtown for a day of public tours. So many people wanted to walk around the five-story Krause Gateway Center, designed by Italian architect  Renzo Piano that extra tours were added last Saturday (Dec.1) and another day of tours will be available in early January. If you haven’t gone already, go! The building isn’t technically open to the public except for the ground floor lobby which now has some cool architectural drawings and models tracing the development of the building.  Eventually the ground floor will also have a restaurant open to the public — an outpost of Table 128, one of the better restaurants in the metro area. An outdoor plaza to the west of the building is also public green space, with 128 mature trees,  interactive musical sculptures, chess tables, bocce ball courts and cafe tables —  perfect for people visiting the Pappajohn Sculpture Park (just south of the Krause building) who want to bask in the shade for a bit. 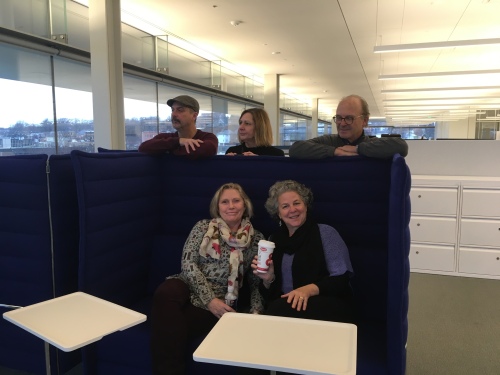 The building is unlike any other in Des Moines — or elsewhere that I’ve visited–with its massive scale and sculptural look including high glass walls separated by four overhanging white horizontal planes.  The glass walls on the main floor are 29 feet high — higher than any other such walls in North America except for an Apple store in New York City. The space is very light (naturally) and the building almost translucent. From the building’s south side,  you have a fantastic view of the sculpture park below and if you look north, down a long hall, you can gaze through another window at a street leading up to the Sherman Hill neighborhood.

The interior design is sparse and clean with immaculate desks – in various configurations and groupings. There are high top tables, lower top desks, sitting spaces in an upholstered nook that felt a bit like a padded cell (except one side is open.) Most people don’t have assigned desks. Employees do get their own locker, to store their stuff, which they remove and place wherever they plant themselves during a given day. I gather this is au currant office design (and supposedly spurs more collaboration) but also takes some getting used to for employees accustomed to the creature comforts of their very own cubicle, slathered with family photos, gag bobble-heads and stacks of yellowing paper, yes, paper. 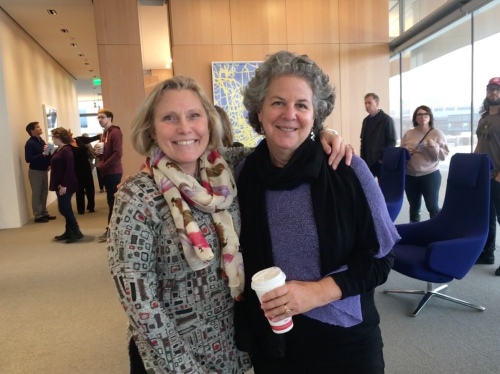 None of that to be found at the Krause Gateway Center, where the furniture is clean and contemporary, popping with color including orange and red Swan chairs, the famous chairs designed in 1958 by Arne Jacobsen for a Copenhagen hotel (I grew up with white Swan chairs in our ancestral home) as well as deep blue, orange and green high-backed chairs and couches. Big dramatic pieces of contemporary art also pop off the white walls and blond wood paneling –and there’s even a second floor art gallery, open to employees only.

The roof has vegetation that apparently will grow — and features stupendous views of the city, although I worry that the fencing at the edges isn’t high enough.