Walking in the Rancho and the Old Zoo- Burbank

“Mister Ed” fans take note: you can see Mr. Ed’s descendants up close and personal, in the small backyards of the Rancho area of Burbank, where residents  (and day trippers) on horseback are so common along the wise suburban streets leading to Griffith Park’s more rugged Cowboy-esque terrain that some of the buttons to push at the crosswalks are high enough for riders to reach.

Could it be Mister Ed? The Rancho, Burbank

We did a short loop through the Rancho and behind Disney studios and along what is apparently the Los Angeles River (it looks more like a concrete spillway or wash), conveniently ending up at our new haunt, the High Horse Dinette/Basecamp (this time for a very good breakfast  (a shared skillet with scrambled eggs, cheese, chorizo). It seemed more in context when approaching it this time after walking past the equestrian center stables in the Rancho and next to the cars and bikes in the parking lot were two horses tied to a post. 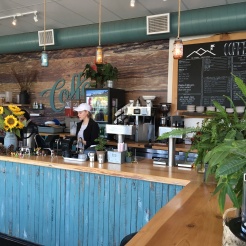 Our hike to the old zoo (near the new zoo) in Griffith Park was cut short in a very Hollywood way. A nice PA with an occasionally squawking phone (akin to a walkie talkie) stopped us just as we were about to walk past the old cages to suggest we not enter. The TV show 911 was filming an episode featuring a live tiger that presumably escaped. Turning around was an easy decision.