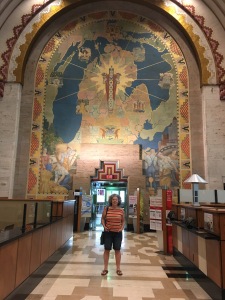 This summer’s adventures in downtown Detroit included an excellent egg-centric brunch at Parks & Rec Diner, a fun little spot  way downtown in a former, you guessed it, city of Detroit parks and rec office in a surprisingly elegant castle-like stone building. Cheerful spot with good service, lots of young people in vintage-inspired outfits (later learned there was an LGBT festival nearby) and creative egg dishes (a creamy bright yellow hard boiled duck egg accompanying a mound of smoked salmon atop a lightly flavored crime freise sauce, and a heap of thick brown eye from the famous Avalon Bakery; Turkish eggs – perfectly poached with olives, tabbouli and homemade pita). 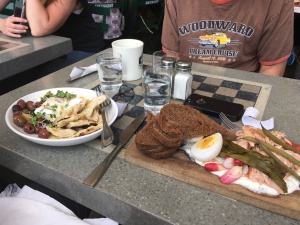 Onto the Guardian Building, an Art Deco beauty that was more impressive than anything I saw recently in Miami’s South Beach. Who knew? 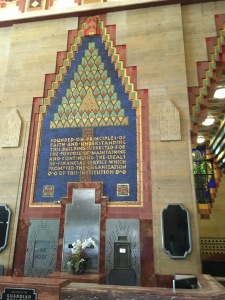 We took a free walking architecture tour that began at the Guardian and focused on the deeply cut ornate stone reliefs by an artist named Parducci that adorn buildings by famous Detroit architect Albert Kahn. We got as far  as the Penobscot building and then had to break off early so I could get to my 40th high school reunion at the always stunning campus of Cranbrook in Bloomfield Hills.

It was amazing to see 30 some people including some from Australia on the walking tour by Pure Detroit. next trip, I hope to take a tour of the Guardian Building and maybe even dare to ride a bike around the area. I really think this time Detroit is “back” but it’s at that fragile stage where there’s a lot more work to be done but also a palpable sense of potential and discovery. I hope it doesn’t tip either way (back into decay/decline or forward too fast into overdeveloped. Tricky to manage.