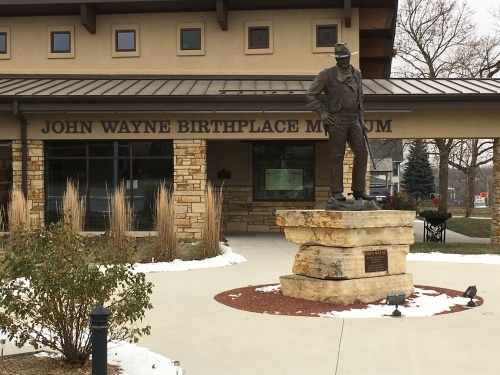 Just back from a catch-up trip to the pretty town of Winterset in Madison County, about 40 minutes south of Des Moines. This is the place I take our out-of-town visitors to see rural Iowa at its bucolic best – and even on a dreary November day, there was a certain beauty in the work-a-day rural life as seen from the two-lane highway that leads off of I-35 from Cumming southwest to Winterset,  winding past old farmsteads with fields of cut corn, baled hay and pastures with grazing horses, cows and lambs. I had to wonder how long the area will stay this way, given all the rural exurban developments that are also cropping up – big suburban-style houses on small acreages and the occasional “party barn.”

For years, I’ve pretty much added the John Wayne birthplace to my tour as a little footnote – it’s a small unassuming white house. But now there’s a big new building kitty-corner housing the John Wayne Museum so it’s harder to ignore (and I’m writing a travel story about it for a newspaper). The museum isn’t big – but it’s worth a stop (and, I guess, the $15 admission). There’s one big room full of memorabilia from the old western movie star – including his  1972 custom-made Pontiac Grand Safari station wagon – a long metallic green number across from an old “side car” (aka a horse-pulled buggy)   used in the 1952 western “The Quiet Man” directed by John Ford and co-starring one of Wayne’s favorite leading ladies,  Maureen O’Hara. There’s letters of appreciation from movie c0-stars (Bob Hope, James Stewart, Lucille Ball and Kirk Douglas – who noted he and the Duke “didn’t see eye to eye on a lot of things but shared a love of country.”) and presidents (Reagan, Bush), costumes from his many westerns and military movies (including a white western-style shirt smeared with fake blood – i.e. a “special effects blood stain” – from the movie The Shootist), family photos of wife 1, 2 and 3 and his many kids; an a signed Andy Warhol print of Wayne as the iconic cowboy.  I also enjoyed the short movie tribute inside a little mock theater with plush seats reportedly from L.A.’s Grauman Theater, showing clips of “The Duke’s” films and costars – including two surprising ones, Lauren Bacall and a young Ron Howard. A nice woman who grew up in London but has long lived in Winterset showed me around the humble middle class house where John – actually Marion Morrison – was born in 1907 and lived for three years before moving to nearby Earlham and then at around age 7 to California. A family photo, including the family pet “Duke,” offered an unexpected clue to how he got his nickname. The four-room place doesn’t have the original furniture but it is period and gives you a feel for John’s humble beginnings. 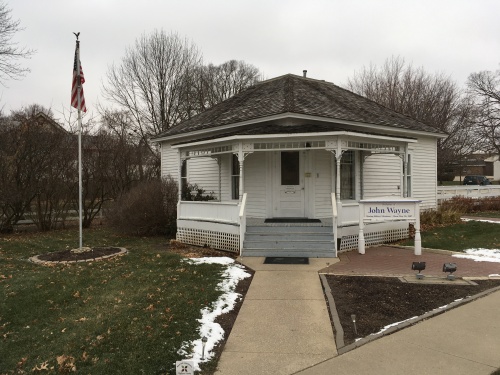 I also stopped at the 1st Avenue Collective, which has surprisingly good crafts including many by Central Iowa artists – and a very cool location, in the old county jail (used for that purpose from 1903-1992) , with several cells with painted metal bars and worn walls now displaying ceramics, linens and handmade dolls.

Best muffuletta and seafood bisque in, of all places, Winterset, Iowa.

And of course no visit to Winterset is complete without a visit to the Northside Cafe, one of the best places in Iowa – let alone rural Iowa – to eat. I had the killer muffuletta sandwich and seafood bisque that was full of fresh shrimp and crab. It took considerable will power to save half the sandwich for my husband – and to NOT order some pie.