Peaches to die for — Yamanashi 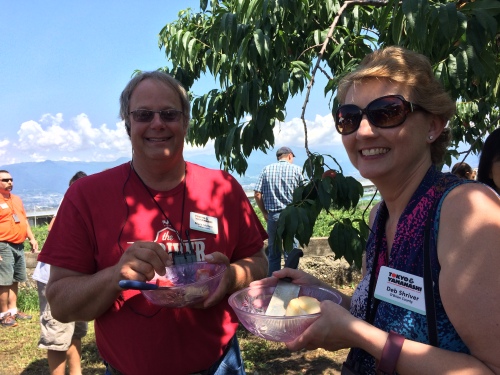 Soon after we arrived in Japan, I started craving fruit and eyeing, in particular, the perfect softball-size peaches in markets. But I didn’t eat one until today, when we were invited to eat as many as we liked while touring a peach orchard here. The peaches sell in markets for 400 to 600 yen ($4-6) each which is why I put off buying them. Today, I ate more than I’ll admit.

THey were amazing – soft but not mushy or mealy, white flesh and oozing with juice. We ate some that had been frozen and they were delicious. This was followed by homemade peach ice cream which was on par with Bauder’s ice cream in Des Moines.

The orchard was one of five or so fruit/veg businesses we visited in fields surrounded by mountains densely covered with green vines and what looked like kudzu. We also went to a rice paddy, a peach sorting plant, a greenhouse with grapes (that Iowans helped recover from a huge snowfall that damaged the building), a fancy fruit and food market (with ham and pork genetically derived from Iowa hogs).  At each stop, we were warmly greeted by staff, owners, workers, often receiving gift bags with caps and tenugui (hand towels) and fans, not to mention peaches and many other food samples.

At one spot, a television reporter greeted us. Must say this is a very cool thing about being an Iowan – having this warm longstanding relationship with a rural region of Japan that dates back to 1960. People here seem genuinely pleased that we came all this way to visit. And how cool that the Iowa/ Yamanashi sister state relationship is the first between a US and Japan state/ prefecture.

Midway through our tour we were ushered into yet another banquet hall for yet another excellent meal, beautifully served. We had special wide flour noodles made here, in a miso soup, greens and pickled stuff, some steamed chicken and vegetables, rice (of course) and what I think was mochi dusted with green tea powder.

Interestingly, Mt. Fuji has disappeared behind the clouds – you’d never know it was there so glad we had it for so long yesterday.