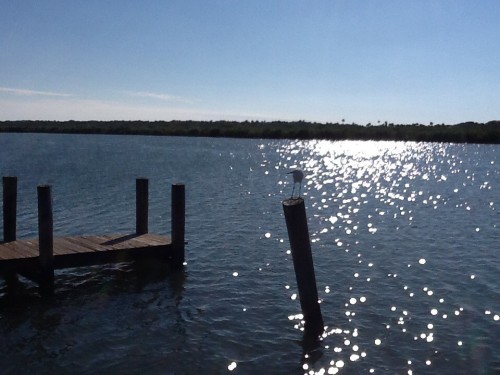 I had to return unexpectedly to the restaurant I ate at yesterday in Titusville (to pick up the credit card I left there) so decided to see a little more of what I believe is called the cape Canaveral Coast. First stop cocoa beach which has a rickety old ticky tacky pier and several surfers were out on a suddenly cold (50s) but suddenly clear and sunny morning. Fun Fact: I dream of Jeanne (the 1970s tv show) was set in cocoa beach (according to some history I read in a display on the pier). I also saw some enormous cruise ships, which I gather set sail (so to speak) from the area. My favorite high school name in the area was Astronaut High.

After Titusville (with credit card now back in my wallet) I drove along Highway 1, mostly lined by green vegetation and surprisingly free of much development. This the Indian River area of citrus fame so I stopped for some OJ and bought a honey tangelo (a tangerine/grapefruit mix).

In New Smyrna Beach, I drove miles and miles on a narrow stretch of land bordered by apartment building and then beachfront homes (completely obscuring the view) to a cool place called JB’s Fish Camp, that looked like a cross between a fishing cabin and a tiki bar. On the edge of an marshy inlet/river, it has an old deck where I persisted (despite the cool temps)in eating at a picnic table (fortunately The sun was intense). I had a crabcake (a specialty of JB’s) that was memorably excellent and a piece of key lime pie (after confirming that it was white, not green…something my mother taught me as a kid when we’d search for the best key lime pie during trips to Florida). This was almost an ice cream consistency– frozen and cold and fantastic.

back in Orlando, we had burgers at graffiti Junktion, mostly so I could show Dirck the little cool area downtown called Thornton Park. The burger was very good but should have been warmer, the service was lackadaisical and the place had a faint odd smell that reminded me of pink bathroom soap, which didn’t fit the grunge decor (with too tidy graffiti on the walls).