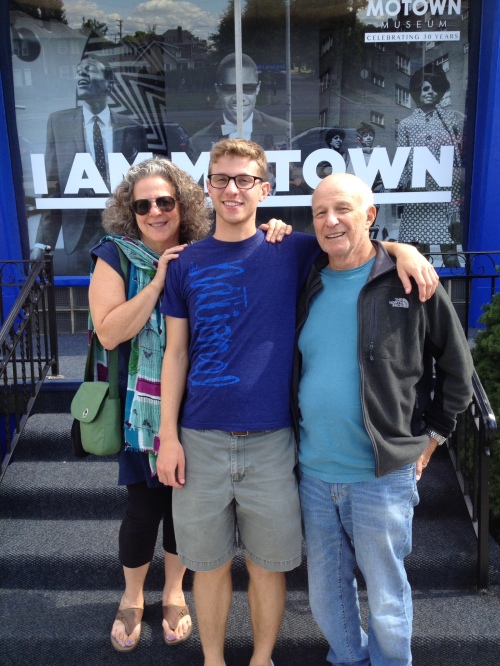 First stop Shinola, where we admired the sleek decor, the watches and bikes and almost total absence of price tags. next door at willy’s, a high-priced boutique, then to jolly pumpkin  for a light lunch in cool post industrial decor (Korean short rib pizza with arugula; curried potato chips.

we dropped by the Avalon bakery on the Wayne state campus which I’ve heard about for years. Amazing to see all the development going on. And really nice to see people walking around downtown where Hudson’s used to be and eating outside at a cafe.

Next stop: Pewabic pottery, a national historic landmark and a drive down Iriquois Street in Indian village lined with gorgeous well tended homes and gardens and yards and then, a stones throw away on charlevoix, classic urban blight with crumbling old houses and weed strewn empty lots.

onto Hitsville USA: the Motown museum in two of the eight houses where berry Gordy built his empire. A really fun tour full of music and interesting stories and memorabilia. It’s a very low tech exhibit which ai appreciated – you got to stand in the recording studio where many soon to be famous performers created their hits and the old 1960s office and living quarters. Our tour guide was young and enthusiastic and the tour ended with us all winding and dancing a Motown tune. Two Japanese tourists and a Brit among us.

Tonight we went to slow’s BBQ, in the shadow of the former crumbling train station, once a symbol of Detroit decay and now a symbol of its revival, as it is being rebuilt and repurposed.

Forgot to mention that we started by dropping by my great grandfather’s old house on the still elegant Boston Blvd.