The Ortigia peninsula of Siracusa is spectacular! it’s a small fat finger of land gutting out into the Mediterranean, densely packed with narrow streets and alleyways lined with three story creme colored stone buildings, many with gargoyles and crazy curving wrought iron balconies and then a wide open plaza with what feels like polished marble floors, dominated by a cathedral that is so old that you can see the original huge columns of the Greek temple that served as a skeleton or bone structure of sorts for the eventual ornate baroque cathedral. Wow!

we stayed at the hip but not haughty Hotel Gutkowski, in two old buildings that overlook the crashing waves of the east side of Ortigia. I was lucky to snag one of the handful of sea view rooms, which we could see through our opened French doors. The place was full of texture, rough hewn wood beams, earthy stone tile floors, shabby chic furniture, a jumble of old stuff and new, contemporary art. Very well done. And the staff could not have been nicer. Free granita was served in the early evening on the roof, with a glorious sea view.

for lunch, we had amazing fresh pasta with seafood done in Sicilian tradition at Sicilia in tavola, a friendly trattoria that immediately filled up,for lunch with reservations. But the hostess suggested we return in a half hour so we did and voila…a table! We had some unlikely combos that definitelY worked: spaghetti caserecci (clams, shrimp, pistachios, olive oil tomatoes) and a Sicilian specialty spaghetti alpar palermitana ( pine nuts, raisens, sardines, wild fennel, onions, bread crumbs, tuna). for dinner we ate at Gut, the restaurant in the hotel although not run by it. We had well seasoned octopus over a bed of thin sliced vegetable tempura and some simple fresh fish. the breakfast this morning was great. — finally some really good fresh fruit including very orange, very sweet cantelope, fresh figs, moist prunes.

in the evening, a big Saturday night, we followed the crowd down a narrow street to the duomo and past some hopping trattorias and bars blaring disco music and down to the castle like fortress at the tip of the pen insular where there was another bar and disco music. Fun to watch the crowd, everything from teens on the make to whole families with little kids out and about at 11 pm and a rollicking wedding party. Too much fun! 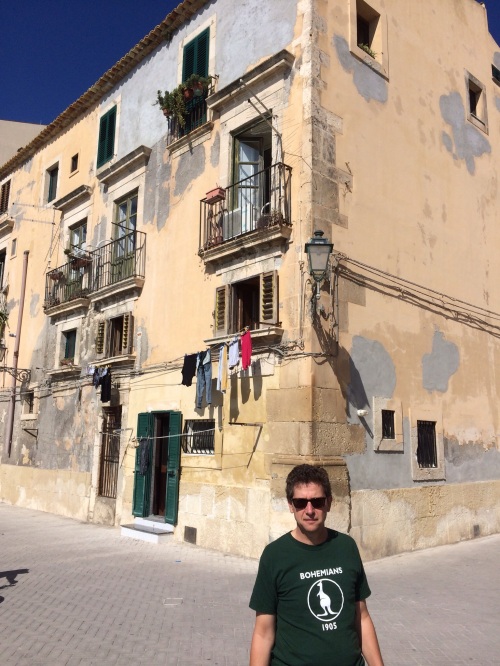