Our stomachs were both a little shaky today but we still enjoyed a lovely traditional meal with our friend Ignacio, who is from the family our son is living with in Lima. Sweetheart of a guy who is also a foodie so we did had the best Arequipa dishes! I had a superb shrimp soup – chuppe del Cameron’s – huge fresh water shrimp Ina red bisque with all kinds of stuff in it, a chunk of potato, squash, a poached egg, choclo (thick kernel corn.) I also had my first glass of chicha morale, sweet purple juice that looked a bit like grape juice. I liked it! D had pork chiccarones (yummy fried pork ribs, a roccoto relleni (- red pepper stuffed with chu ks of beef, raisens,etc) and a potato pie that looked like scalloped potatoes but tasted different. For desser we tried another Arequipa specialty quest heldado, a yellow ice cream made with cheese and grated cinnamon. Later we saw someone selling it on the street. (excuse my incorrect Spanish spellings. I will clean up later.)

although I appreciate the artistry of peru’s big name chefs, I have to admit that the food I have liked the most here is the more simple traditional fare. We ate at Chicha, another famous restaurant and it was okay. But I preferred our meal today. I think my stomach did too.

We also saw some more sights including two more superb churches, especially de la compagnia, with it’s gorgeous stone carved facade. It’s worth the 4 soles to visit the lovely side chapel which is hand painted with fruits, veg, figures. Also went to the church near the restaurant where we ate in the pretty little suburb of yanahuara, San Juan Bautista and got a good view of the volcanos rising in the distance from a lookout next to the pretty plaza. Ignacio also took us to see a few Tambos, hidden little lanes lined with old houses that reminded us of mews in London.. Tambo del matadero and tambo Brouce can be found off of bolognese street near the river. We had a drink and superb vibes of the plaza des armed at sunset with the lights of the city and the mountain ranges outlined against the sky tonight at the restaurant on the roof. Well worth the climb and not as touristy as we feared. They even lent thick wool ponchos to some underdressed slovs who sat near us.

Tonight at our hotel we met a nice guy who is a Peruvian actor and singer named Jorge madueno, or Pelo, who just shot s film here. We loved this place! 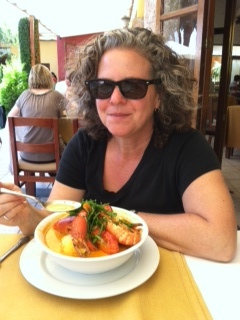